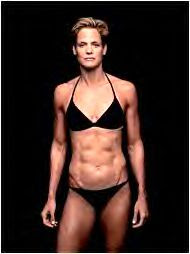 Wow!!
Need we say more? We couldn't ignore the inspiring story of Dara Torres. She's 41-years-old, and the mother of 2-year-old Tessa Grace.

And Dara Torres just picked up a silver medal in the swimming relay last night. She's got 10 Olympic medals. That's right. Nine medals from 1984, and now this one! And she competes in the 50M freestyle soon. My money's on Dara. In addition, Dara Torres broke a century-old Olympic record last evening, by becoming the oldest swimmer in the Olympic games.

How are Dara's Olympic accomplishments an important beauty tip?

Just take a look at the photo. The body is rock-solid. She's 41, and had a baby. That just goes to show us all, that a super body can be developed at any age, with the perfect amount of dedication, nutrition, and fitness.

Dara is close to 6 ft. tall and weighing in at 149 lbs. And we have Dara Torres' diet and fitness tips.

Dara doesn't count calories, because she says she had an eating disorder in college (bulimia). She told MSN.com, that for breakfast power, she drinks a Living Fuel Shake (berry-flavored) with milk and fruit.

As we get older, our bodies change, when it comes to diet and fitness.

"The biggest change is recovery. I don’t recover as quickly as I used to, so now I try to eat more foods—lean protein in particular—that help me recover quicker."

"A mixed green salad, turkey-spinach lasagna, garlic bread and green beans. My favorite cookbook is one I got in college—Where’s Mom Now That I Need Her?"

Dara also cheats, probably not too often, considering the superior shape she is in.

" It’s OK to have bites of food that probably aren’t the best for you because that way you won’t deprive yourself and then want more of that food. I eat what I want, when I want, but I exercise so I can do that."

This Olympic medal winner trains very hard. Gearing up for the summer games, Dara had a head coach, sprint coach, strength coach, two stretchers, two masseuses, a chiropracter, and a nanny for her daughter, all at a cost of $100,000 a year. And we can see by the results and her big silver victory, that the grueling and challenging work has paid off.

1. Root beer float "It has to be made with IBC root beer and Breyers vanilla ice cream."2. Vanilla cream cookies "They're so good I don't even bother taking bites. I just put the whole cookie in my mouth."3. Blocks of milk chocolate from Fresh Market "This is real, no-BS chocolate." 4. Lime Tostitos "They have a kick to them. I love to munch on them before dinner." 5. Fresh-squeezed lemonade "I keep it in my water bottle."
Posted by J. Tania Stylianos at 12:21 PM

Luved your article, J Tania!
Dara Torres is quite an athlete. I'm 40, and she is an inspiration. Glad she likes to cheat on snacks, too.

She's an inspiration to this former athlete, too. I agree with her "no foods are off limit" theory - as long as you exercise. Great article! Off to make a root beer float...

Thanks for your opinions, ladies.
I couldn't agree more.

Gotta keep the body moving, although, it gets tougher every year. I like Lime Tostitos, too. Yummy. Let's all cheat now!

I agree about the not depriving yourself of the foods you like because if you do then when you get a chance to eat it you usually over eat it.

She's an inspiration to this former athlete, so we cannot forbidden her tips.Glad she likes to cheat on snacks, too.

She's an inspiration to this former athlete. I agree with her "no foods are off limit" theory - as long as you exercise.

Apple Replica watches UK : I to determine the April release dateEnhai field Wo: AppleReplica Watches has invited the in order to send the March 9 in San Francisco, “the front spring” incident.But, we already know that it is to begin shipping in April Apple Rolex Daytona is, and we do not have to had a specific date or price for the global market. This seems very reasonable, but, Apple is in more than one week of Replica handbags the short event, make sure these points handbag replica .