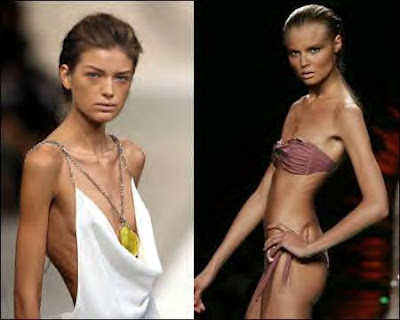 Lara Stone. She could be the new face of the modeling industry, or rather, the new body to admire and copy.

Lara Stone is a size 4. For most women around the globe, a size 4 is tiny, especially when your height is 5'10'. But in the super skinny world of modeling where the runways feature a long string of very tall size zeros, Lara is certainly a breath of fresh air. She actually has the appearance of breasts and hips.

And Vogue Magazine has taken notice, and we applaud them. We were flipping through the January issue last evening, when we saw the same photo of Lara Stone, with the caption reading: 'The Shape of the Future.'

Well, it's about time. Sure, a size 4 is still rather small, but it sure beats the emaciated look of the zeroes filing down the runways.

The Dutch model is 22, and we love how Vogue has described her striking looks: "a beguiling mixture of tough and naive---imagine Sandra Bernhard crossed with Grace Kelly."

And despite her curves, she's getting a lot of work, like ad campaigns with huge names---Calvin Klein, Hugo Boss, Givenchy. And Lara, who was named by her mom, a Dr. Zhivago fan, has walked the runway for just about every big designer.

Maybe the fashion heads see her as a curious oddity of sorts. She sticks out on the runway, as the current size zeroes walk along with her. And Lara feels the sting of the bias against heavier models, as she explains to Vogue:

"When you're a model, nobody calls you fat. 'What they say is curvy, but you know they mean fat."

And she recalls a recent incident where a female stylist took out a tight corset dress and told Lara to put it one for a photo shoot. She obviously couldn't fit into the dress and found the situation to be quite rude. "It's not an easy kind of rejection, because it's very personal," Lara says. "It's you, your body. You take it to heart."

It's been a tough year, once again, for the fashion industry, who have been courting the stick skinny models. Designers would argue that long, angular bodies wear clothing better. You remember the Ralph Lauren flap last October, with a print ad heavily photoshopped to create a super-slim silhouette? The model, Filippa Hamilton, eventually lost her job modeling for Lauren. Filippa was upset about the excessive photo re-touching and spoke out. She claims she was reprimanded for being 'fat.' We have learned that Filippa wears a size 4.

We can only hope that the curvier models will become more of a presence on the runways and back in the ad campaigns in the year 2010. Photographers like the famous Mario Testino appreciate the fuller figure. "I have never thought of Lara as fat," Mario explains. "It is just a matter of different shapes. It reminds me of when I started to work with Gisele(Bundchen); everyone used to think that she was too voluptous. Look at where she is now!"

Let's face it, the modeling world will always feature super tall and super slender, young women. And yes, clothing does look its best on that type of silhouette. But when a body is so thin that bones are sticking out and gaunt faces are ruling the runways, then maybe it's time to return to some kind of normalcy. And if that means a small size 4, that's a huge turn around.
Posted by J. Tania Stylianos at 10:50 AM

Gr8 article JTania.I cant even fathom someone 5 10" +being a size zero. That's so skeletal.

If someone like that came to our Super Slim Slimming Club; www.superslim.co.uk she would be sent straight to her GP as she needs help to get to a sensible and healthy weight.What damage is she doing to herself even at what only appears to be a superficialy normal weight