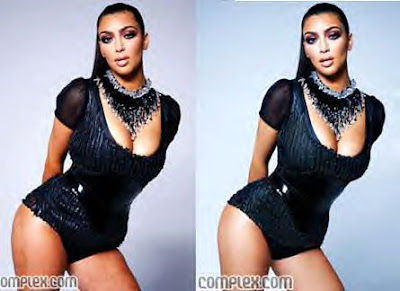 "How many people do you think are photoshopped? It happens all the time!" she writes, later adding, "I'm proud of my body and my curves and this picture coming out is probably helpful for everyone to see that just because I am on the cover of a magazine doesn't mean I'm perfect."

That's what Kim wrote on her blog yesterday, after 'before and after' photos from a spread for Complex magazine got out over the internet. Pics that show the curvy beauty 'before' with cellulite, and 'after' with none. That's called photoshopping, and Kim Kardashian is correct. Photoshopping is done all the time on many beautiful and not-so-beautiful celebrities.
http://kimkardashian.celebuzz.com/2009/03/yes-i-am-complex.php

Meantime, we admire Kim K's honesty. She even admits to having a little dimpled fat:

"So what: I have a little cellulite. What curvy girl doesn't!?"

And lovely Kim K is not alone. Yesterday, in our BeautyTipToday article about Cindy Crawford, the iconic model also admitted to some dimpled fat:

CINDY CRAWFORD: I think I look pretty good for 43. But I don't look the way I did when I was 23. So if Star magazine or whatever wants to print a picture of me on the beach from the back, at the worst possible angle, and say that I have cellulite, I'm like, Guess what? I do, and I never said I didn't. I've had two kids, and I'm 43, so leave me alone.

Attacking women and then calling them fat, is really disturbing. Kim Kardashian is curvy. And the clothing she sells from her closet on Ebay, are all listed at size 2 or 4. So to call her zaftig is really stretching it.

Even Katie Couric was photoshopped in her picture for the evening news when she first got the job. The photos had slenderized her waist, making her appear much slimmer. And Katie is quite petite to begin with.

Photoshopping is common in the world of beauty. But then again, most of it is sheer fantasy. So why are people surprised when they see that celebrities have pimples, scars, cellulite, etc?

No one's perfect. And thank goodness, for that.
Posted by J. Tania Stylianos at 12:12 PM

freakin'leave kim k alone! evryone picks on her. she's not fat. i don't see much difference to the photoshoped image. and evryone gets airbrushed in hollywood.