Lose Weight: No Sugar Soda Celsius Burns Up To 100 Calories 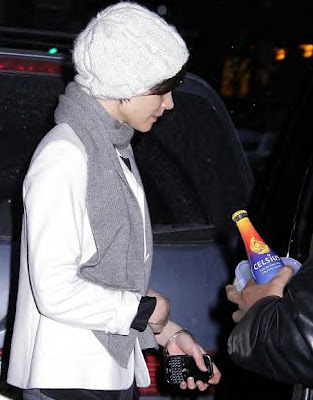 We just caught up with this celeb-secret calorie burning soda last evening, when we saw a television commercial.
Celsius. Great name for a 100-Calories burning soda in a can, that speeds up your metabolism!

So, does the stuff actually help you lose weight?

Who knows. Katie Holmes, wife of Tom Cruise, who's been looking ultra-slim these days, supposedly enjoys the drink. Her bodyguard was seen walking with her holding a bottle of Celsius, believed to be Katie's.

The science on Celsius is there, and we will try and explain it in layman's terms. Meantime, at least the soda does not have:
carbs
sugar
chemical preservatives
or all that fructose syrup

"One SINGLE SERVING (12 oz can) of Celsius burns up to 100 calories, by increasing metabolism on average by 12% for up to a 3 hour period."

And the clinical studies have beem going on for quite some time, since Celsius has been around since 2004.

"A second clinical research study completed by the University of Oklahoma and published in the Journal of International Society of Sports Nutrition in February 2008 reviewed the acute effects drinking a single serving of Celsius and reconfirmed that over a 3-hour period, subjects consuming a single serving of Celsius burned 65% more calories than those consuming the placebo beverage and burned an average of more than 100 calories. The data further showed that women in the study increased their metabolic rate by an average of 14%, while men increased their metabolic rate by an average of 8% during the 3-hour period following consumption of one 12 oz. bottle of Celsius."

At least the drink is healthier for you than a can of cola. And it couldn't hurt. Plus, it comes in lots of yummy flavors:

Celsius is sold almost nationwide at most Walgreens and Vitamin Shoppe stores, as well as many local supermarkets. It costs about $48 a case.

This chick is SO skinny, so maybe the drink works.Thanx for the tip, Tania.