Not All Hollywood A-Listers Run For Botox To Zap Wrinkles 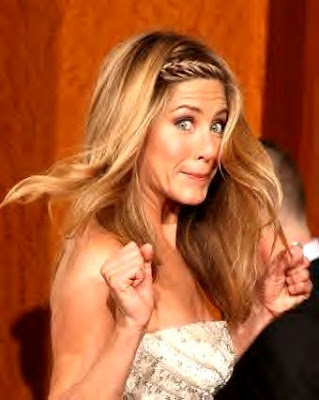 Actress Jennifer Aniston is back in the news again.

And yeah, once more, it has to do with John Mayer. According to http://www.people.com/, the couple has split again. And John Mayer supposedly broke up with Jen, as he did the first time around.

But we are not here to hold anyone's hands. We're simply here to prove to all the doubters out there, that not all of the Hollywood A-listers run for Botox to get rid of fine lines and wrinkles.

Closely examine 40-year-old Jennifer Aniston in a candid shot at the Academy Awards Show back in February of this year.

Some of you might say, sure, she doesn't Botox her forehead, but Botoxes her crow's feet and the two lines between her eyes, or the glabellas.

Who's to say. We believe Jennifer Aniston when she has repeated over and over again, that she is not a Botox user.

In fact, we just picked up this little nugget from http://www.imnotobsessed.com/:

"I tried Botox once and it was really not good for me. I felt like I had a weight on my head," Jennifer Aniston remarked. "I think it makes women look older. Harder. The warmth in their faces goes away. You see women and you know they’re not young, but you can’t tell how old they are. That’s what stopped me."

It’s been noted that Botox procedures have jumped some 400% in the last several years. Botox cosmetic is really from the botulinum toxin type and continues to hold the distinction of number one injectable in the United States. Dr. Frederic Brandt isn’t surprised at its popularity.

We know that Hollywood beauties all flock together to their derms for Botox. But it is refreshing, that not all the A-listers go for the sting of the needle to stay perpetually youthful.

Jennifer Aniston can really make an honest expression.
Posted by J. Tania Stylianos at 11:58 AM