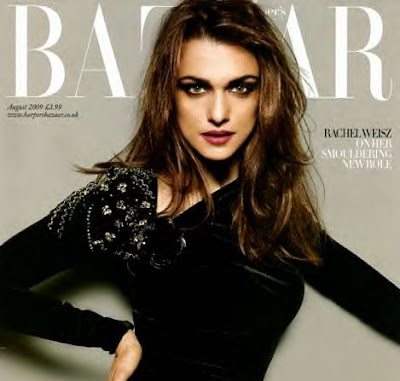 Yes, we can all see that British actress Rachel Weisz is a stunning woman at age 39.

But does she have to go on and on about the badness of Botox, as she discusses in the August 2009 issue of Harper's Bazaar UK?!

Rachel Weisz is the mysterious, sexy model gracing the cover of Harper's as you can see her here in black velvet. And this is what she was quoted as saying in the magazine interview:

“It should be banned for actors, as steroids are for sportsmen,” the Oscar-winning actress says of Botox. “Acting is all about expression; why would you want to iron out a frown?” As for fashion, Rachel says, “I love the way girls in London dress; it’s so different to the American ‘blow-dry and immaculate grooming’ thing.”

Tongues are wagging that the lovely actress was photoshopped like crazy, here for the magazine cover. Her waist and all-over silhouette appear much tinier. Which brings catty remarks from some women as to, how is Botox bad, but photoshopping is not? Why didn't she demand the editors keep her figure curvier, as we all know Rachel is blessed with?

Good point. It's okay not to use Botox. Actress Jennifer Aniston, who recently turned 40, claims that she, too, will not use the stuff. But to declare that a few needle pricks of Botox should be banned for all actors, is quite silly and bizarre.

Botox is not invasive surgery. It's not a facelift. It is a cosmetic procedure, one that most doctors would consider mild. It is known as an injectable. And Botox temporarily paralyzes muscles so that you can't make frowning expressions. As a result, wrinkles appear softer. Forehead lines, crow's feet, and frown lines all disappear, more or less, for about 3-4 months.

Sure, some people go overboard, where it seems almost mannequin-like. You can't readily tell if the person is happy, angry, or any emotion in between. But most women and men who receive Botox injections subtley erase deep frowns and look healthier and rested.

Botox has also been used under the arms to stop excessive sweating, and has been used for many years prior to its cosmetic value, as treatment for a number of neurological disorders.

Botox is actually a new kid on the block. It's only been 7 years since the FDA approved the injectable for cosmetic purposes. 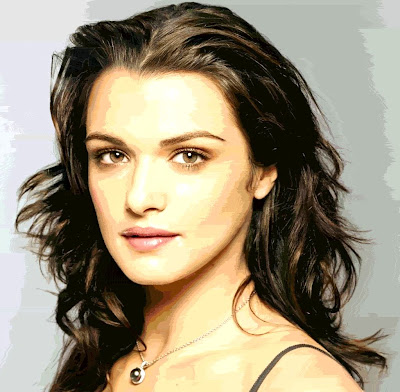 What we can say, is that Botox is extremely popular and does plenty of good for women and men who want to temporarily erase some of the sun damage and natural aging process. In fact, Botox was the top non-surgical cosmetic procedure in 2008.
We cannot tell actress Rachel Weisz to be quiet and stick to acting. Er, well, of course we could, but we won't. We would like to check back with Ms. Weisz in 10 years when she turns 49, and see if she has changed her mind about this popular injectable, known as big bad Botox.
Posted by J. Tania Stylianos at 2:49 PM

I think what is funny is how misinform you are. Rachel has no say over the photo shop image but you will not have the guts to go after the people behind magazine, which does it with most of its covers.

Next time try to know what you guy are talking about, it makes you look dumb when you don't, like this article.

And by the way, Rachel is right.

Nice to hear from you. You know, you are right. The magazine folks are the ones who do the photoshopping, and therefore,ultimately control the ultra-slim image they want to project. But who knows if Rachel didn't tell them to 'whittle' her waist a bit.

I don't think the article is dumb.

I sometimes believe a lot of celebs lie about what they have had done + have not done to their bodies. I don't believe an injectable like Botox is bad news because it disappears over the span of about 4 mos.

It isn't permanent,and it surely isn't a facelift. Botox can do wonders when it is done subtley and properly.

I think injecting restylane and sculptra all over the face can look dumb because it changes the entire facial structure.

Thanks for reading our stuff.

Sounds completely sensible to me. Photoshopping is digital manipulation of a static image. Botox is a toxin derived from a pretty-bloody-nasty-actually paralytic disease. i can see why someone would rather have a single picture of them altered with a computer than fill their face up with plague-germs.

Also, altering a picture with tattyshop doesn't leave the facial muscles restricted for four to six weeks, which means it's not a disadvantage for someone whose profession leans on subtle facial expressions, as partially paralysing one's face certainly is.

Good on Rachel Weisz. The haters can go back to the Jocelyn Wildenstein worship.