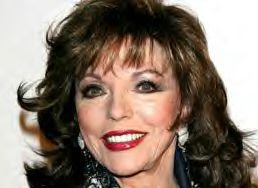 Dynasty Joan Collins says she wants to make the U.K. a more glamorous place, and that's what the 80's icon is trying to do on her new television show for Brits, 'Joan Does Glamour.'

Yes, another makeover show for women. Well, we say, why not?! Too bad we can't see it here in the states.

At age 76, we think Joan Collins looks pretty darn good. And she wishes women in the United Kingdom would take more care about their appearance. Dynasty Joan hates muffin tops and, "I don't admire the jelly belly oozing over the top of trousers. It should be covered up."

Look at the photos below. Joan believes that the mid-section should not be naked. And we happen to agree there. By the way, skinny chicks can also have muffin tops. 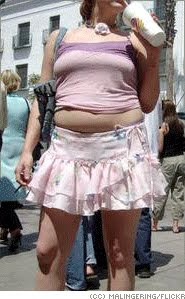 Joan Does Glamour takes an 'ordinary' group of women and makes them over into stylish ladies.

"For too long it has been acceptable to wander around in T-shirts, trainers and low slung sweat pants," says Joan. She believes that she can make the world a better place by boosting one's self-esteem.

What's wrong with that?

As long as Dynasty Joan isn't being snarky and rude, then we think she is on a good mission. If you look at makeover shows like, What Not to Wear here in the U.S. with Stacey London, you see an excellent attempt at re-making a person's image and yes, self-worth. A new wardobe, jewelry, and shoes, plus a new hairstyle and proper makeup, can give any woman a huge boost in life. So we do see the beauty value in respected makeover shows. 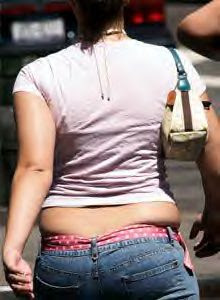 And Joan Collins' Joan Does Glamour show is crafting new images for women on sensible budgets. No over-the-top spending.

"I want to show British women that you don't need a designer budget to achieve a glamorous and timeless style," the Dynasty star explains. "If people took a bit more care of their appearance, they might feel a little bit better about themselves."

To see a clip from an episode of Joan Does Glamour from ITV, check it out here, courtesy of New York magazine:
http://videos.nymag.com/video/Highlights-from-Joan-Collins-Do.

LMAO!!! Joan is a wonderful Bitch to the 9nth degree! Luv her! Wish I could see that show, dammit.