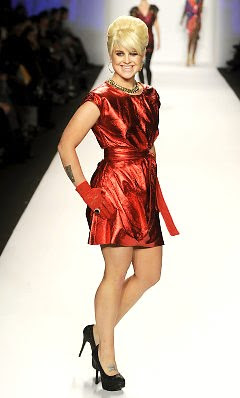 Kelly Osbourne has been the little darling of Fashion Week in New York City. And she has good reason. Kelly continues to keep the weight off and is wowing folks with her slender silhouette. She just modeled for super model Naomi Campbell in a Fashion for Relief Haiti show in Bryant Park. Just look at her in a shiny red dress. From Dancing with the Stars to the uber chic runway, Kelly Osbourne has cha-cha-cha-ed her way to a healthy and attractive new body.

So, exactly how has the offspring of famous rocker daddy, Ozzy, been successful at keeping the lbs. off? By moving.....staying active, and picking up better eating habits. Kelly was once a size 14. She's about 5' 3''.
"I’ve tried so many stupid fad diets to try to lose weight, when all I needed to do was start dancing,” Kelly wrote in a column for British magazine 'Closer'.
Kelly continues to cha-cha-cha and has also added Pilates to her work-out routine, according to an interview she gave to Life & Style magazine.
"Pilates is amazing, my posture is so much better and I'm even starting to get muscles on my tummy - it's incredible," Kelly says.

As far as her diet goes, Kelly Osbourne tells the magazine, that she had to create a new one.

"I've completely changed the way I eat since doing Dancing With The Stars," she says.
For instance, a half an apple is the natural sugar Kelly enjoys snacking on before heading to bed at night.

"A trick I've learned is to eat just a little bit of something that has no carbs and no sugar in it before you go to sleep because it keeps your metabolism going.

"They say you should never eat before you go to bed, but I've found just having a tiny little snack - like half an apple or something like that - before you go to sleep really helps," Kelly Osbourne
explains.

And instead of having "10 sodas a day, I'll have one," Kelly has told In Touch magazine.

And she also says it's not about the number of lbs. one loses. Do not compare yourself to others. "All these people worry, 'Oh I have to be under 100 lbs.,' but everyone has a different shape."
Kelly also says to keep a positive frame of mind. "I find that when I get depressed, that's when I gain it all back. But as soon as I start working and I'm productive and I start feeling good about myself, the weight just goes."
Posted by J. Tania Stylianos at 12:13 PM

im a fan of Kelly even whne she was fatter. now all thez wannabes are trying to be her freinds. she looks so cute now.

she looks rly good so much better than before. She done a very good job, is not so easy to lose weight, especially when everybody watch you. Hope she does not fall backwards into her bad eating habits again!