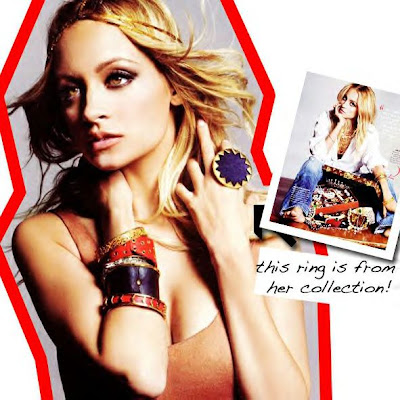 We have to say---we like what we see on you, Nicole Richie.

And if you are looking for some really pretty Christmas jewelry ideas: head over immediately to:
www.shopkitson.com. You still have time!!!

And if you've been sleeping under a rock, well, Harlow is the name of Nicole's darling baby girl.

"It's a name I'll never get sick of," she says, of naming her new jewlery line after her favorite girl.

Nicole Richie admits to having an extensive jewlery collection. And she loves bracelets. She collaborated with major designer Pascal Mouawad. The jewelry is inspired by the 1960s and 1970s decades.

"I pulled a lot from African and Indian cultures," Nicole explains.

According to the House of Harlow line, “The collection is targeted at girls in their teens to women in their 30s who admire her, and the prices range from $30 to $150.”

We love Nicole Richie's fashion style. She is looking better and better. Reminds us of a young Sharon Tate with her large, rimmed doe eyes and long blonde hair.

Nicole is big on accessories and says that jewelry flatters a woman's appearance. "I love having jewelry around the face," she says.

someone bought me a bracelet ffrom Harlow. real pretty.