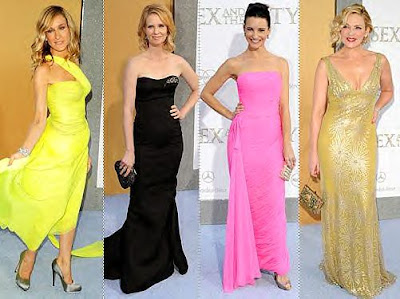 Sarah Jessica Parker in sunny yellow. Cynthia Nixon in sexy black. Kristin Davis in bubblegum pink. And Kim Cattrall in classic Hollywood gold lame.
The Fab Four did not disappoint this second time around. The four lovelies were met with crowds and crowds of adoring fans at Radio City Music Hall for last evening's 'Sex and the City 2' premiere!

The sequel looks juicy and adventurous, and yeah, the camel rides in the desert look like a blast!

Of course, all 4 actresses are over 40, and look darn good, with sexy Kim Cattrall just in her 50s! But were the gals looking a bit too youthful and too amazing for their own good in the movie poster?!

Well, according to some haters, apparently, and allegedly, the movie poster for 'Sex and the City 2 is extremely airbrushed. "Someone went a little crazy with the Photoshop and the golden-hued skin colour corrections, and everyone in this poster, doesn't just look a little crazy, but not remotely like themselves," Cinema Blend blogger Katey Rich writes.

You mean to tell us, that this is the first movie poster to ever airbrush its actors and actresses? Give us a break. Movie posters always make those in Hollywood look younger, sexier, curvier, and more attractive. A movie delivers fantasy. Duh!

And yes, we assume, that Sarah Jessica Parker, Cynthia Nixon, Kristin Davis, and Kim Cattrall all might have had some kind of cosmetic enhancement. But they certainly are not alone.

There's been talk about SJP's several subtle nose jobs. But she has only admitted to a mole removed from her face. There have been rumors about Kristin's alleged nose job, and gossip about Cynthia Nixon's supposed facelift. And we have also read of Kim Cattrall's admitting to Botox but not to plastic surgery, from a British publication.

Who's to say? We think the Fab Four look fab-u-lous and youthful with, or without the movie poster.

Now, pass the popcorn, and let's enjoy the show!
Posted by J. Tania Stylianos at 11:11 AM

Great site. A lot of useful information here. I’m sending it to some friends! I invite you to see my post, I hope you will find interesting too.