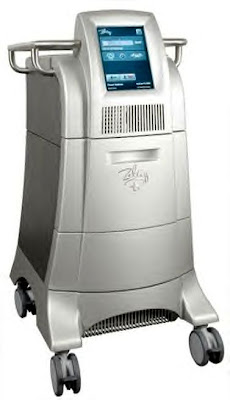 Fat. Would you believe there's a brand new non-surgical way to 'give the cold shoulder' to fat.

It's called Zeltiq and it actually involves frozen lipo-(suction). How super cool is that!! And it's safe, quick, and it really, really zaps away problem fat, from areas like belly, lower back, and those hated love handles. And the best part-----no anesthesia and no incisions. The treatment device itself, uses a suction applicator with "cooling" plates on areas where fat reduction is desired. To us, so far, this is the biggest cosmetic beauty advancement in 2010!
So, how did the Zeltiq beauty gadget come about?
Well, we first learned about Zeltiq on GMA this morning. And our jaw was hanging out in disbelief. The before & after photos had us sold!
Zeltiq is not FDA-approved here in the United States for frozen lipo just yet, although doctors are allowed to put it to that use. However, it is actually an approved procedure, that gets the target area ready for skin-cooling applications.
The scientific word for frozen lipo is called, cryolipolysis , which sounds kind of creepy. We found some folks who can explain it a lot better than we can. This from cosmeticsurgerytoday:
"Cryolipolysis means the destruction of fat cells by freezing or cooling. While the exact mechanism of action is still unclear, the current understanding is that when fat cells are exposed to cold, they undergo necrosis (cell death) and/or apoptosis (genetically programmed cell death; like a self-destruct program for the cell). In any case, the fat cells break apart and die within days to weeks after cryolipolysis."
And this is how it works:
The Zeltiq suction applicator is placed on a targeted area like the belly or love handles. The skin, along with fatty tissue, is sucked into the device and held between two chilling plates for about an hour. Most patients will feel the suction sensation, but it isn't a painful experience. At the 30-minute mark, the device may be removed and the treated tissue briefly massaged before the procedure is continued. Following a Zeltiq procedure, patients reported that treated skin areas were temporarily cold to the touch and sometimes a bit red. But normal activity could be resumed that day.

How much does it cost? One Zeltiq procedure can begin at $400, and up.

We think Zeltiq sounds like a really cool investment in 2010!!
Posted by J. Tania Stylianos at 11:17 AM

JUst in time. My wedding is 3 mos away. I hope they have this machine in TEXAS!!WOuld u kno?

I found a doctor in Texas - http://www.mycosmeticprocedures.com/find-a-doctor/plastic-surgery/jeffrey-hall-md.html - I live in Florida and found 2 doctors on this same site - went to see one last month. The procedure's pretty sweet!!! I liked it.

I found a doctor in Texas named Jeffrey Hall. I live in Florida and found 2 doctors on this same site - went to see one last month. The procedure's pretty sweet!!! I liked it.