You Either Like the Kate 8 Hairdo Or You Hate It 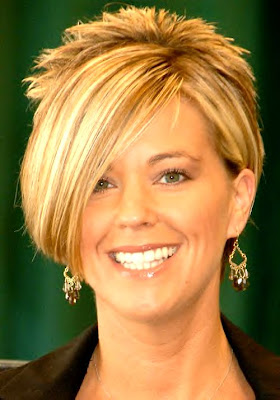 Okay, we are going out on a limb here, to declare our love for the Kate Gosselin hairdo.

And we are finding, that you either like this bob hairstyle with the spikey, choppy back, or----you really, really hate it!

Kate Gosselin is the 34-year-old mother of 8. You know her from the television reality show Jon And Kate Plus Eight.

The cute couple has been in the news and tabloids for a few weeks now, ever since it was alleged that husband Jon was fooling around with another woman.

Today, we heard that the Gosselins are splitsville. It's a sad ending for a family of adorable twins and sextuplets. Let's hope the rumors are untrue.

This Kate Gosselin hairstyle has been getting lots of buzz, mainly from people who despise this bob. Critics call it out-dated, 'Brady Bunch mother do, 80's punk hair, unflattering striped hair coloring, etc.

It isn't the Rachel hairstyle from Friends. So what? Lots of young women and moms across the country have been asking for this haircut for a couple of years now. It is actually a very popular hairdo.

Meantime, Kate Gosselin has said to EW that she has heavy hair. And she says her Pennsylvania stylist gets many, many calls for the unique bob:

“It’s my attitude! Everybody wants it. It’s work. I have very, very thick hair, so it’s not going to work for everybody. I’ve seen people come through the book line with thin hair and it just won’t work. My hair stylist gets calls from all across the country.”

We believe that Kate Gosselin could care less if you like her hairstyle. She's workin' it. And she's in the headlines daily, more than the other former blonde bob queen, Victoria Beckham.

Cute on her, a little odd in the spikey back, though.

I couldnt wear it and its so bizarre looking but its actually growing on me...LOL

Looks cool on her. She's right - you have to have the right kind of hair - thick. And a certain face shape.