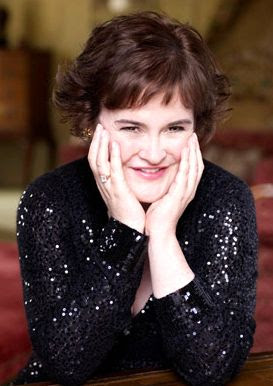 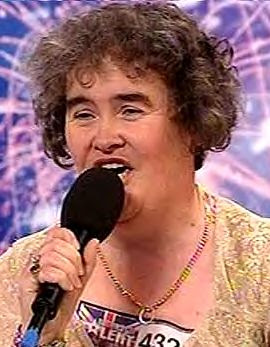 Wow. That's all we have to say here.
We know the photo with the lady and the microphone is singing sensation Susan Boyle.

But be honest. Would you know that the photo of the glam woman with the chic clothing and hairstyle is also that of 48-year-old Susan Boyle?!

We did a double-take, and then a triple-take. My goodness. Like we've always said before.....a little makeup and pretty hair can make a huge difference in a woman's life. Huge! Just covering up dark, undereye circles and wearing a little lip gloss can speak volumes.

The photos were taken of the Britain's Got Talent star for the September issue of Harper's Bazaar magazine. On newsstands August 18th.

Susan Boyle, the Scotland native who lives with her cat, Pebbles, was excited to pose for Harper's and to get made-up and glam. Back in April, Susan received her first makeover with a more fashionable wardrobe, darker locks, and thinner eyebrows.

And now these amazing photos with Harper's Bazaar, have her looking younger, slender, and so attractive. But Susan hasn't gone in for the real Hollywood makeover yet, and has some reservations:

"Maybe I'll consider a makeover later on," she said a few days before showing off her new look. "For now I'm happy the way I am -- short and plump. I would not go in for Botox or anything like that. I'm content with the way I look. What's wrong with looking like Susan Boyle? What's the matter with that?"

Very pretty, Susan.Way to go + you sure clean up nice!