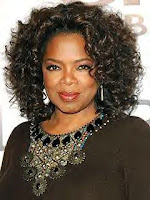 Yes, the divine Miss Oprah is a wonderful, intelligent, and very generous woman, but when it comes to losing weight, diet plans, and health advice, well, maybe Oprah should just stay silent.

Here we go again. Oprah is on another diet. As you might recall back in October of 2007, Oprah told her viewers and readers in O Magazine, that she had packed on the pounds because of a medical problem.

Then in February of 2007, Oprah blamed her weight gain on "too much bread and mashed potatoes," and not hitting the gym enough.
Now Oprah is blaming the weight gain on something new---an attachment to certain foods. According to People Magazine, Oprah has embarked on a vegan, 21-day detox plan. O is impressed with Kathy Freston's book Quantum Wellness and online sessions with Canadian motivational speaker Eckhart Tolle. (She's also getting help from chef Tal Ronnen.) And she is keeping a diary about her progress at her website.
"This 21-day cleanse gives me a chance to think about [eating] differently and see what my attachments are to certain kinds of foods – and what I'm willing to do to change," she wrote on Sunday (day one). "Don't know if I'm going to feel better or worse, but I'm willing to try to see if my body at least feels differently."
So far, so good, for Miss O.
"I had been focused on what I had to give up – sugar, gluten, alcohol, meat, chicken, fish, eggs, cheese. 'What's left?' I thought," she wrote on day two. "Apparently a lot. I can honestly say every meal was a surprise and a delight, beginning with breakfast – strawberry rhubarb wheat-free crepes."
So what's the big deal? Look, Oprah, by her own admission, has tried just about every diet plan out there. Is Oprah a yoyo dieter?
"She tried the Atkins diet, she tried diet pills. She tried the Scarsdale diet, the banana, hot dog and egg diet. She tried a 1,000 calorie a day diet. She tried Weight Watchers, Diet Work Shop and Diet Center. She tried Nutri-System," explained a reporter for the Orlando Sentinel Newspaper.
In addition, Oprah has a personal chef and a personal trainer. Some women figure, if Oprah can't keep the weight off with all these resources, how can the rest of us, even have a chance?
Maybe Oprah should stick to a sensible diet and moderate exercise, and go from there. Detox plans probably work in the short term, but offer little else for maintenance.

Yes, diet can do harm to your body.
Some diets don't suit some people.
So, there is no suprise that this diet is bad. It doesn't fit her.